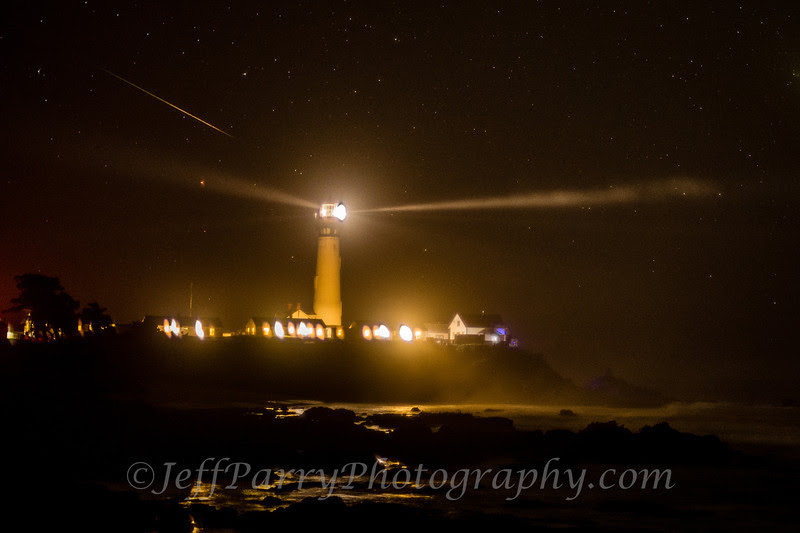 I was thinking about scoping out the north side of Pigeon Point at night to test out my old Nikon 50mm f/1.4 lens on my D600 to see how it would shoot for a time-lapse of the stars, waves/tide, lighthouse lights and occasional airplane flyby. The night was moonless on November 5th 2013 at about 8:30 pm and my old lens aperture is so wide at f/1.4 that I could use less ISO sensitivity and thus achieve less digital noise. The 50mm has relatively little distortion on my full frame sensor as well. The problem was all the lights on at the hostel. I wanted to have longer exposures so I could blur out the ocean waves and still get all the stars. There was quite a bit of lens flair from all the lights that I had to crop out of the frame so it would not look like the Martians were attacking! Actually a red tail lite from a car pulling into the parking lot on the lower left (out of frame) caused the main (red) lens flare directly in the lighthouse beam on the left. It was getting kinda misty and the farmer next to the lighthouse had warned me he was going to spray fungicides that night so I knew I only had a little bit of time to test a bunch of shots. I finally settled on 2 second exposures at ISO 1600 at f/1.4. The flash pattern at Pigeon Point is every ten seconds so the two second exposure on the 6 beam fresnel lens would capture some nice beams in the mist. I was also experimenting with exposure delay and that essentially drops the camera mirror a few seconds before the shutter releases to avoid camera vibration in such a sensitive exposure. That meant I had to delay the time between shots a little longer than I normally would. I also delayed a few seconds for the memory card to write the large amount of RAW data before it could accept the next time-lapse photograph sequence. So with 2 second exposures I had a 5 second delay between photos. I set it for 100 shots and just enjoyed the view while my Nikon D600 took the photos. It was towards the end. Shot 89 I believe, that I saw the meteor enter the atmosphere right above the lighthouse. I thought to myself, I hope I got that shooting star  in one of my time-lapse sequence photos, but knew the probability was iffy because of the delays. I also knew that if I did get the timing right, the super wide f/1.4 aperture and the 1600 ISO at two seconds would be perfect to get it! Sure enough, frame 89 out of 100, there it was! I did very little post production in Lightroom other than adjust the white balance and to crop out the lens flairs from the hostel lights and to focus on the meteor's entry into Earth's atmosphere. Turns out it was the tail end of the  South Taurid meteor shower that peaked on the 4th and ended on the morning of the 5th. Please visit my website to see the largest version.
Mahalo,
Jeff
Posted by Jeff at 9:14 PM 1 comment: