Mercury, Venus and Jupiter over the Pigeon Point Lighthouse 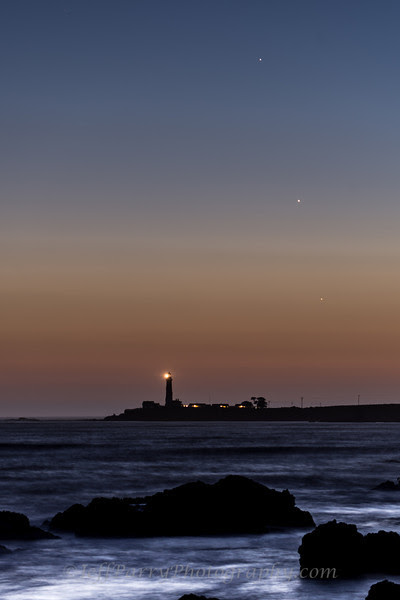 I was aware of the 'Triple Conjunction' of the planets Mercury, Venus and Jupiter on the horizon just after sunset during the last week of May 2013, but the coastal fog had been lingering the past few days and I did not know if I would get a chance to see it. But tonight, May 30th the sunset seemed to have a clear enough sky to melt into the sea with little atmospheric interference to obscure the planets just after sunset. I drove a short distance down south to a farmed area just north of Gazo's Creek State Beach. After bush-waking through tick infested grasses I found a sketchy trail down to the beach, around some flooded rocks and scrambled up a to a rocky point that almost perfectly lined up with the planets I wanted to photograph. I only had a 180mm lens so I knew I could not get too far away or else the lighthouse at 115 feet tall would look too small in the overall composition of the picture. Franklin's Point may have offered a better alignment but I don't have a 600mm lens with f/2.8! A bit of wind reminded me I could not do really long exposure with out camera shake. I was able to keep the ISO down to 50 on my new Nikon D600 with my 70-180mm Nikon lens I focused it at 116mm with an aperture of f/5 and opened it up for 6 seconds after a 2 second delay from my timer to reduce camera shake. In Lightroom 4 I was able to crop it a little bit to my liking and then use the Graduated Filter I could lighten up the foreground oceanscape to give it some context and highlight the beautiful setting without having to just focus on the lighthouse and the sky with the 3 planets. Here is the wide angel scean before the planets became visable earlier in the sunset twilight! Enjoy :D 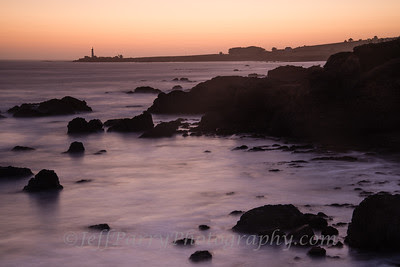 Thanks for visiting and please leave some comments! Mahalo! Jeff
Posted by Jeff at 11:59 PM